Every single one of my grandchildren has experienced making tortillas. I really didn’t make them roll out tortillas, they asked if they could try. My youngest grandson wanted to help this week, so I left the last one for him to roll out and he did a great job.

He was really concentrating on the instructions I gave him, start in the center and roll down, then back to the center and roll the top part up, turn the tortilla and do the same thing over again, adding a little flour  if the tortilla sticks to the rolling pin. By the way, these are just my instructions, I think it’s easier if you do it this way.

Because of them helping with this tradition of tortilla making, a few tortilla monsters have been created. If I know that a certain grandson is coming over, then I have to make more. But this fills me with joy that they can have homemade tortillas and not the cardboard tasting ones from the store. Well, I confess, we do eat those once in a while.

Here’s a tortilla that I rolled out, cooking on the comal.

That morning I was making papas and chorizo. Chorizo is Mexican sausage with eggs scrambled in the sausage, which is a touch greasy, but yum,  it tastes so good! If you want to make it a little healthier you can do half soy chorizo and half of the real thing. Also you can line the serving bowl with paper towels so that they can soak up the grease.

There is only one person in our family that doesn’t care for chorizo and that is our son. He says, “Anything that needs 2 or 3 paper towels to soak up the grease can’t be good for you!” 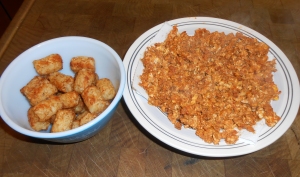 Okay, I fibbed a little. Those are tater tots, not papas, but hey, I deserve a break sometimes.

I make my masa without a recipe, I just guestimate on the amount of ingredients that I need,  but there are some good recipes out there. We use flour, baking powder, salt (optional), and shortening for the masa.

What is your favorite greasy food?

I'm not an expert at anything, I am an ordinary person that loves to sew, quilt,( my way), and do many crafts. I spend time with my 4 grandkids and I find time to read, as well. I recently retired as a Library Technician and am enjoying my free time.